Conflicts at work are something we often deal with, as positive and agreeable as we might be, but that’s not necessarily bad. A constructive work conflict is even a desirable condition to every productive team because it leads to more valuable solutions. As a leader, you should encourage them. However, sometimes these disagreements go beyond the constructive line and become a damaging factor in your team.

Photo by JD Mason on Unsplash

Most articles and studies out there talk about how to approach a work conflict once it arises, but I found a methodology that focuses on how to prevent them from happening in the first place. Quite a new approach compared to what we’re used to, right? I thought so too, that’s why I decided to dedicate this article to explaining how the prevention methodology works. Hence, why it’s better to change our point of view on conflicts, if we want to see less of them.

Work conflicts are not essentially bad

Up to a certain point, conflict is a good and necessary element for a team to be productive and move forward in the right direction.

If you’re not sure about that, try to imagine the contrary. A team where everyone cheerfully agrees on everything is actually dealing with one of the following problems: either they are so focused on agreeing with each other that they are putting that before their actual goals, or they are too frightened to speak their mind.

The ideal environment is what specialists call a psychologically safe workplace, where people don’t feel uncomfortable to speak up. Even if it means disagreeing with colleagues or bosses.

There is, however, a point where good work conflicts become bad and your role, as a leader, is to read the signs and put down the fire before anyone gets burned.

Traditionally, leaders approached the idea of resolving conflict in two ways. One is to address the issue as soon as it arises. In other words, go on focusing on day-to-day tasks and react only if necessary. The other solution is to wait until there is clear indication of an issue or conflict before addressing it.

According to professor Ginka Toegel, both approaches are out-of-date, and you should replace them with a more proactive one. Her advice for leaders is to work towards preventing future conflicts by addressing sensitive issues before they arise.

Toegel and her research colleagues have studied team dynamics for over 25 years and their results point to the most effective solution: surface differences before they germinate and you’ll dramatically decrease the chances for a work conflict to start.

They propose that managers prepare a team for working together with a series of five conversations that last between 20 to 30 min each. These meetings focus on different areas of the work process, such as the way people look, act, speak, think, and feel. According to researchers, these areas most likely result into a conflict.

Take looks, for example. Imagine how the people in a software company, where the dress code is t-shirt and jeans, would perceive someone wearing a suit and tie. Because that person appears to be out of context, people will tend to treat him/her somewhat differently. Addressing this kind of perception issues at an earlier stage can save your team a lot of time, productivity, and obviously can help avoid potential conflicts.

Toegel proposes five meetings, each dealing with one of the five sensitive areas. The team leader kicks off and manages each meeting, where he/she needs to ask a few essential questions. The researchers suggest a few ice-breaking questions (find them in the table below) that bring up the most work conflict-inducing situations. Here are some question samples taken from the article How to Preempt Team Conflict, published on hbr.org. 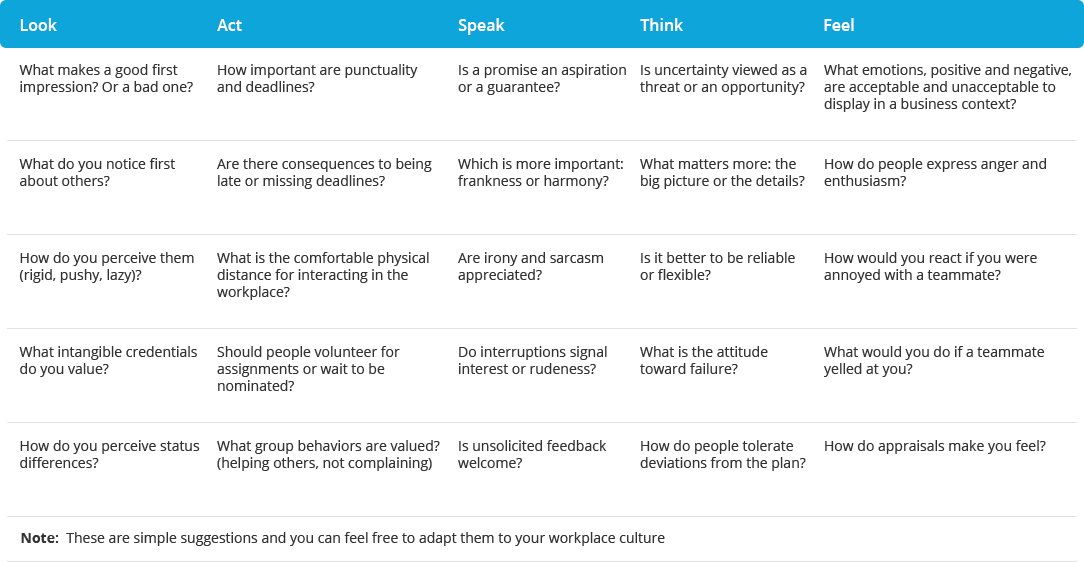 These questions are likely to generate discussions status differences and emotional display that, in some cultures, are never directly addressed. That’s why it is very important that you start the meeting with the right tone and explain the attendees the purpose of the discussion. Encourage people to speak openly and refrain from passing judgments. Make sure everyone feels safe about discussing their opinions and you’ll be amazed to see how many land mines you discover and defuse.

Why this method works so well

We rely on patterns to understand the world around us. That’s why the first impression we make (or someone makes on us) is so important. We tend to analyze at a glance looks and behavior and judge people by the patterns we’ve already established. But we all know that looks can be deceiving and the best way to figure out what the other person is all about is, simply, to get to know them.

These meetings do just that. They force the team to deepen their knowledge of each other through topics that don’t come by easily otherwise.

In her TED speech, Take the other to lunch, Elizabeth Lesser suggests a similar method to make opposing political supporters try to see eye to eye. She proposes a lunch where any two people ask three questions they would normally disagree on.

Similarly to Toegel’s method, Lesser thinks an open conversation can make a huge step towards a better relationship.

Her conclusion is realistic and I believe it applies well to our business context. She thinks a lunch (or 5 meetings, for that matter) won’t turn enemies into best friends. It won’t make someone give up their beliefs and admit the other person is right. But it will make people more aware of the context, life experience, and feelings of the people around them. It will build the foundation for a more compassionate conversation in the future. And most importantly, it will set the right expectations.

Keep an eye on the red flags

As a leader, one of your essential roles is to develop and maintain a healthy, productive work environment. In this context, identifying work conflict areas at an early stage is crucial.

The 5-meetings methodology offers a suitable context for you to do that. But that doesn’t mean that your conflict-prevention job ends once these meetings are over. As I said earlier, they will not resolve differences of opinion, but rather make everyone aware of them. So keep an eye on the topics that arise and plan for the future.