We started thinking about Hubgets many years ago. We didn’t want to build yet another instant communication platform, but solve a problem that emerged five years ago and which, today, seems to have become much worse. Funny enough, last week I read this article on Medium, so I decided to write this post and tell our story.

In your personal environment it’s OK to use any instant communication app you want. It may not be good for your mental health to be under constant siege by the multitude of apps that compete for your attention, but, in the end, everyone is free to decide for himself. The uninstall button is there 🙂 Professional life, however, is full of contradictions. Your demanding colleagues and bosses will want your full attention – sometimes 24/7 –  while they expect you to be highly productive and take the best decisions. Is this even theoretically possible?

You may have heard of Daniel Kahneman, a renowned psychologist who won the Nobel prize in 2002 in economic science. He has taught us something extremely interesting. 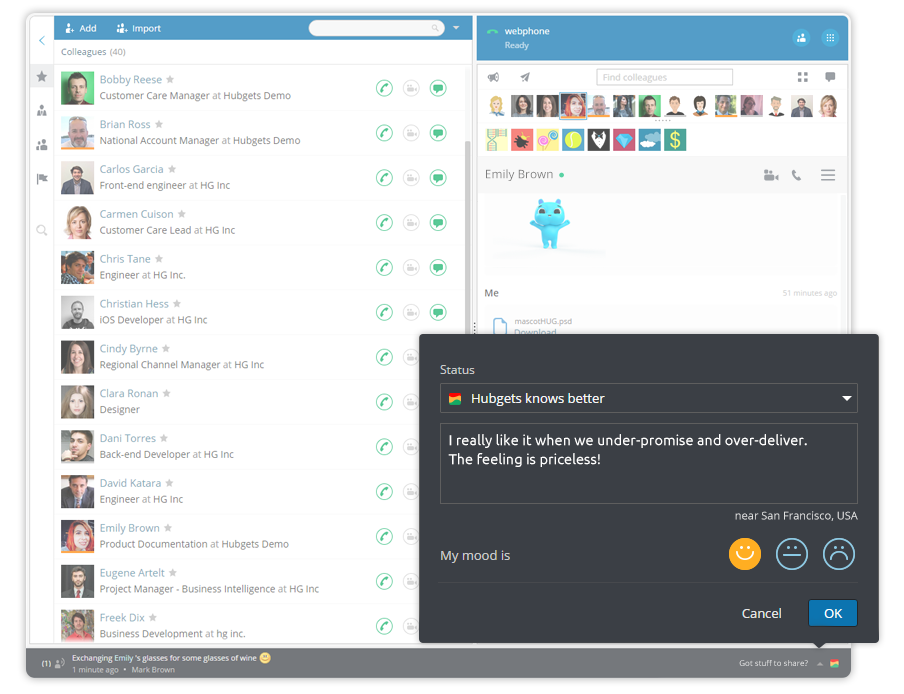 What? A psychologist who is a Nobel laureate in Economy? This is highly atypical, but it has a very good explanation. Kahneman focused his long career on human irrationality. Together with Amos Tversky, another distinguished cognitive and mathematical psychologist, he discovered that human judgement tends to be greatly influenced by a multitude of factors which are logically unrelated to the subject of judgement.

This behavior affects everyone, even people who are regarded as highly objective – judges, for instance. They further demonstrated that people making decisions in certain conditions are not acting to maximize utility, so they are actually not following the basic law our economy is based on. With this in mind, they developed an alternative theory for decision-making that takes into account the human philosophy called prospect theory. This is what got Kahneman the Nobel prize – a prize he would have shared with Tversky, had he not died in 1996.

Do you remember Spock?

If you’ve ever watched Star Trek, this won’t sound surprising. Do you remember the Vulcanian Spock? His process of decision-making was totally different to that of humans, and many times during the movie he exposed the weaknesses of the human resolutions.

What is the connection between instant communication and decision making? Kahneman wrote a very interesting book called Thinking, Fast and Slow, which I highly recommend. In this book, you will discover many things about yourself and the surrounding world that will help you a lot in the future. Kahneman points to the “systematic errors in the thinking of normal people” and describes the mechanisms behind them – “system 1 and system 2.”

System 2 is, according to Kahneman, our analytical, slow, deliberate, conscious, effortful way of reasoning about the world. System 1, by contrast, is our fast, associative, automatic, unconscious, effortless way. System 1 is always with us. It’s the one that detects hostility, the one that instantly assesses a person as attractive or not. System 2 is the one that takes action when we have to fill in a quiz or when we want to get a mortgage. In the book, Kahneman even points out that in order to detect how much a person involves system 2 during a task, one should just look at that person’s eyes and see how dilated the pupils are.

On a high level, it’s system 1 that proposes and system 2 that disposes. System 2 is obviously better – more deliberate and rational. A human can easily act like Spock if only system 2 is involved. This is impossible though, because system 2 is also very lazy and gets bored fast. Many times, system 2 gets overcome by system 1, because employing system 2 would mean slowing things down and analyzing them. This is how humans accept the conclusions promoted by the fast and unreliable system 1.

Kahneman points to experiments they carried out, proving that even reputable and trained professionals allow their lazy system 2 to become polluted by a heuristic answer obtained in system 1, without even bothering to fully analyze the logic behind the conclusion.

What does this mean for instant communication?

This is flawed from the start – such conference calls and meetings will definitely lead to decisions, but bad ones, as they are made based on the system 1 level. A much better approach is to gather information during the conference/meeting and analyze it later using system 2. This approach will lead to the best result. Unfortunately, most leaders don’t do it due to an educated fear and from overconfidence in judgement. They are afraid of being perceived as weak or poor decision makers because they aren’t capable of making a choice in several minutes.

If you want a second opinion that strongly supports Kahneman’s findings, I also recommend The Paradox of Choice by Barry Schwartz, another great psychologist. He clearly shows how most of our system 1 based choices are bad.

Are alerts and notifications making you more productive?

We all know system 1 and system 2 from practice. You have a problem to solve and system 1 can’t provide a satisfactory answer. This is easy to assess for classes of problems that can be validated externally, for example using the laws of Physics. With all the trust in system 1, anyone is able to understand that the result doesn’t actually match the intuition. The obvious choice is to sit down and focus. However involving system 2 takes time – remember how lazy it is? If you are fully isolated, with no (or manageable) distractions, getting into system 2 mode might be easy. Still, when you work in an office with tens of people, lots of annoying sounds and many automated, cool in-app alerts produced by tens of different systems… it’s simply impossible. You might be able to involve system 2 once, but the first interruption will kill all future attempts.

Did you know that there are dozens of studies that show how hard it is to deal with interruptions? Most of them say that it takes at least 20 minutes to get into the deep focus zone after you have been interrupted for just ten seconds. I do not question these results, but they are just benchmarks the lazy system 2.

Twenty years ago, it was much simpler to involve system 2 in the office because there were less distractions. Back then, people were responsible for most distractions and because in the end everyone had to get some system 2, it was possible to focus. But now… this is gone. Cool apps try to get your attention to keep you engaged and tens of different systems are fighting for your prime time. The result is that many people can’t employ system 2 in the office unless they fully isolate themselves.

Are we really bound to make poor decisions?

First, many system 1 decisions are quite good. This isn’t the problem. Imagine a two-level support system; if you remove any of the levels you will get in trouble. The impossibility to reach level 2 is actually the issue.

I personally believe things will get worse for young generations who have serious problems reaching system 2. Kids who seem fast and brilliant actually block everything at system 1 or have an even lazier system 2 that dismisses all system 1 resolutions as perfect. How will this affect our society? It’s really hard to predict. I personally believe that it will deeply affect our capacity to discover new important things. Somehow this is already happening, even today much of innovation is focused on “light” topics.

We started Hubgets because we understood that people need to be productive at work and that they want instant communication.

They want instant communication because they have it everywhere outside the office and it’s a great way to stay in touch with everyone. Text, voice or video? This is interesting as well, because the latest trends show that people prefer texting. There are lots of explanations for this pattern, however, in my opinion, it’s also about these wonderful systems explained above – texting is even easier to handle at system 1.

Our challenge was to build an application that doesn’t abuse people’s time and limits the number of interruptions. This is totally different to what most apps try – to capture the entire user attention. While still work in progress, Hubgets wants to be smart enough to allow its user to get into system 2. It’s reasonably good now, for example I can currently work for tens of minutes without being interrupted by my colleagues, while still enjoying the benefits of instant communication. At any given time I can see what has happened and where my input is necessary. If anything requires my immediate attention, Hubgets will notify me. I can leave the instant communication flow and I can focus on creating valuable results.

Unlike other communication products, there are no notifications levels to adjust on Hubgets, nor dozens of notification preferences to set – just a user presence setting called Let Hubgets manage my interruptions. The algorithms are work in progress and our mission is to build an instant communication system that really helps you become more productive, satisfied about results, and less frustrated about things not working as expected, the common result of abusing system 1.