Whether you’re managing thousands of people in a corporation or a dynamic team in a startup, you want your team to perform the best they can every day. You spend your time striving to help them reach their true potential. And yet, chances are that your team is farther from reaching the top than you think. In our fast-paced digital world, only a hand full of teams gain exceptional results, while so many fail miserably.

It doesn’t have to be this way. You can unleash your team’s true potential by taking a page from the world of football, or soccer if you’re American 😉 This collection of lessons taken from the teams participating in this UEFA EURO 2016 tournament will inspire you to create a team of champions in whatever you do. 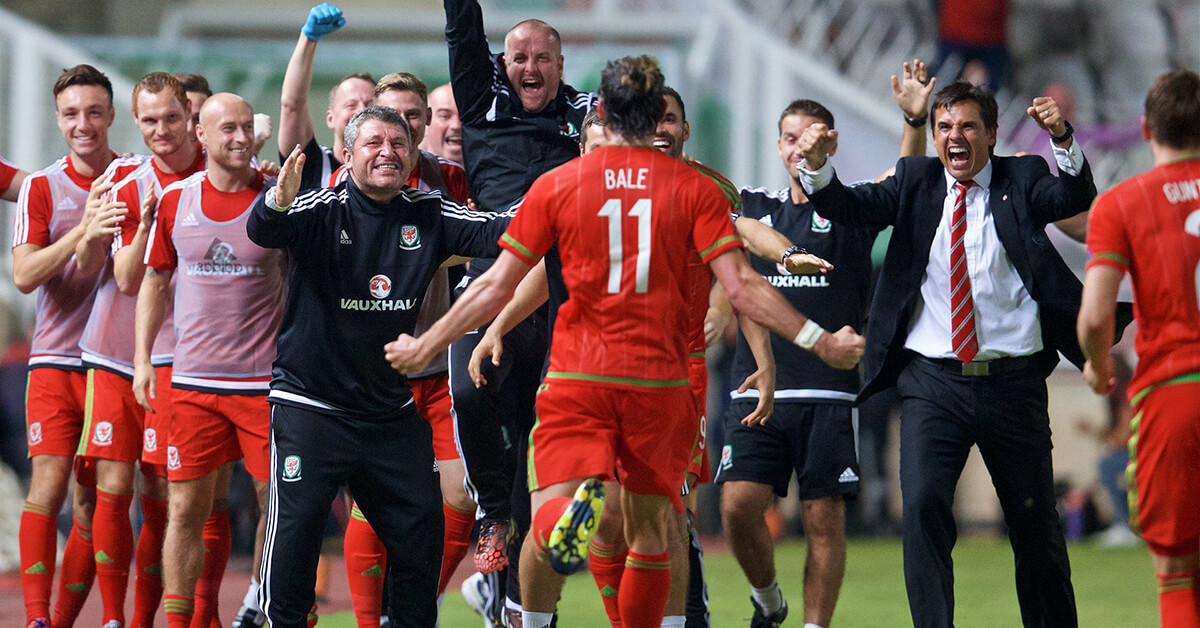 Gareth Bale runs towards Wales’s bench as he celebrates his late winner against Cyprus in EURO 2016 qualifying. Photograph: David Rawcliffe/Propaganda

You are your toughest competitor

UEFA EURO 2016 kicks off today in France: 24 countries will compete to win the 15th edition of the Men’s European Championship.

If you’ve followed the news in the world of sports, you probably already know that this is the first time the final tournament will be contested by 24 teams, having been expanded from the 16-team format used since 1996. In short, the European Championship has never been so competitive.

This is a fact in football as much as it is in business. All markets are becoming more and more crowded and competitive, so it’s tougher than ever to be successful. If your team is committed to becoming the best in your niche, it’s not going to be an easy journey, but make sure you first beat your most powerful enemy: your own culture and habits.

“We’ve got to approach this tournament without fear, we’ve got to show confidence in ourselves. I would like the players to show as much confidence in themselves as we, the coaching staff, have in them because we know we do have a lot of very talented footballers.” – Roy Hodgson, coach for the team of England

Confidence is key yo success. It might sound like a platitude, but if you doubt it, just think about the opposite: have you ever see a winning team lacking confidence? It’s definitely a rare sight. However, we often assume confidence comes with winning. If this were true, how could someone win for the first time?

Having confidence, much like optimism, is a choice you make. If you visualize your goals, keep practicing and maintain a record of your smallest to your greatest accomplishments, you are already building confidence that will fuel your team to keep working hard.

“You can never write off Italy. Let’s just say that we have ambition. It doesn’t matter to me if we’re one of the favorites or not.” – Antonio Conte, coach for the team of Italy

As the Italian coach, Antonio Conte, said, it’s sometimes important to just ignore the negativity around you and focus on your goal. He’s a true believer in the fact that the self-image that he constructs about his team will ultimately determine their performance.

Work with passion and enthusiasm

“A player has to be motivated by his passion and love for football. If he isn’t, he’ll find it very hard to have a successful career” – Antonio Conte

Have you ever seen a “burned out” team? That’s the losing team. Truth is, work is hard and challenging. It’s easy to become frustrated or just disenchanted about “the game”.

If you want a successful team, hire only people who are passionate about what they are doing, who love the game, not only the taste of success. Make sure that your team maintains that enthusiasm and passion by focusing on the small wins, never neglecting the ultimate goal.

Anyone who has ever had to collaborate with other people to achieve something great definitely knows how important and yet difficult teamwork is. The difficulty rarely comes because of the workload, or the external challenges. It takes a lot of effort to create a great team, mainly because teams are by default dysfunctional: they are made up of imperfect individuals with egos and selfish goals.

Luckily, it is possible to achieve great results by sharing a common goal and by making everyone on the team aware that it can only be reached together. Football is a great example here. No matter how good of a player you are, you can’t compete in a championship as an individual. Al Pacino’s character in Any Given Sunday said it better: “That’s a team […] and either we heal now, as a team, or we will die as individuals. That’s football, guys.”

Any team can only be as dedicated and devoted to achieving the final goal if it’s clear for everyone that the individual success is far less satisfying and great as the one shared with your teammates.

Whether in business or on the playing field, by establishing goals, building confidence and working with passion, you and your team will be able to achieve exceptional results.

For more “behind the scenes” stories about the teams competing this year, check out The Guardian’s Complete Guide to Every Team and Every Player.