A couple of years ago, I was dealing with a very common parenting dilemma. How can I help my 7-year-old son enjoy reading?

My husband and I are avid readers and much of this habit developed as we were growing up. Yet our son lives in a completely different world. Like his friends, he’s tech-savvy, results-oriented, and he is used to seeing things happen lightning-fast. Reading just doesn’t fit that scenario. It’s a relative slow process, so you can imagine how tormenting that can be for a YouTube-loving little fellow. In other words, he prefers watching a video to reading a book.

Long story short, the clash of our two worlds left my son thinking that reading is a form a punishment. He has to do it, mostly because we say so. It’s like eating vegetables, only it takes more of his time and it’s definitely more boring.

Even though it felt like a dead-end, we knew there is a way to do it. And we didn’t give up 🙂

The book that made reading fun

One afternoon, while we were taking a walk, we ran into a lady who was selling books from her mobile shelf. I was already excited to search through her little stock, but my son had absolutely no interest at all.

While I was thinking of yet another strategy (cough, trick, cough) to spark his interest, the lady jumped in, not even realizing what a favor she was doing. She asked him if he didn’t want a book as well.

“No, no, no” 🙄 he did not want a book. His summer break had not ended and he had just got rid of a really dull one. But the lady insisted and she recommended the Diary of a Wimpy Kid, because all kids who ever read it came back for the sequel 😯 Full of disbelief and annoyed that, somehow, he got tricked again, he agreed to buying the book and we carried on walking.

That same evening, while waiting for dinner, he started reading and didn’t stop until he finished it. The book, not the dinner! And that’s not all. Every time he started a new book from the series, he had a hard time putting it down. Suddenly, he found books interesting. Wow!!!

Many books later, he no longer finds reading annoying and reads regularly. But the tipping point into his becoming a reader was Jeff Kinney’s books.

Truth is, I’ve never really understood how was that even possible. What is Jeff Kinney’s secret ingredient? So when I finally got the chance, I asked him.

Jeff Kinney has a secret

Last month, Forbes hosted an #AskForbes chat on Twitter with Jeff Kinney. If you’re wondering why Forbes would invite a children’s author, let me tell you a bit about the world’s second-highest paid author in 2016. He sold over 164 million copies of the Diary of a Wimpy Kid books in print and the online version has more than 80 million visits. According to Wikipedia, the series have generated over $500 million in revenue. In other words, Jeff Kinney found the secret recipe for making millions of young adults read books, not simply wait for the movie to come out 😉

Therefore, you can understand my excitement when I had a chance to personally ask him about his success in hypnotizing kids into binge-reading. Here’s what Jeff Kinney said. 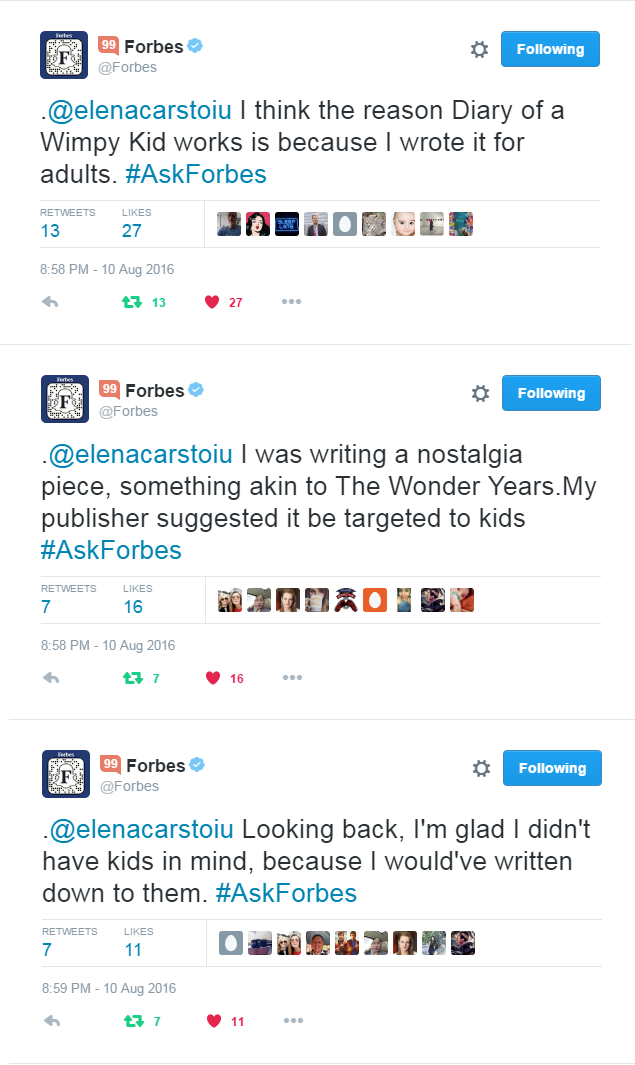 He wrote it for adults. That easy, huh?

But then it hit me. This series of events started looking very much like a message in a bottle I found on the shore. And the treasure hunt began 🙂

1. Experiment till you nail it

Jeff Kinney didn’t know he was heading for an international success when he started out. In fact, he didn’t even plan to become a writer. He had a dream, to become a cartoonist. Along the way, he made up the story of this wimpy kid and just kept on drawing different moments of his life. He worked for 8 years on this book before he first presented it to a publisher.

Once again, we have proof that Rome wasn’t built in a day… Neither has been any successful business, nor a successful career as a novelist for that matter. Kinney’s success came after a long series of unplanned experiments that led him to a final product.

Once you have your target in mind, you’ll find your path to reach it. Much as my son finally discovered that reading can be fun after a long series of dull experiments, anyone can find their way to their goal.

2. There is a generation gap, but we can bridge it

While I was trying to persuade my son with classic tales, Jeff Kinney was getting more and more fans with his books. Diary of a Wimpy Kid is funny, very sarcastic, ironic, graphic – all in all, it has all the ingredients to appeal to young adults. Jeff Kinney did find the way to communicate with a generation much different from his own. That means we can do it too!

If we think about today’s work environments, where Gen Xers great Millennials in the kitchen or by the water cooler, we know that many disagreements and even conflicts are driven by communication habits. Not only we communicate differently, but we also interact differently, especially online, depending on our background and experience. There is a generation gap, but we can bridge it with better communication.

More on the most talked about generation: Interesting Stats About Millennials Every Manager Should Know

Many studies have revealed that a fast-growing percentage of people feel more comfortable when engaging with others online than face-to-face. What’s more, when we analyze the online communication patterns, it is quite obvious there is a big difference on how various generations communicate both at work and in personal life, by using words, emojis, pictures and videos to express their feelings and share their ideas.

To close the communication gap, we need to empower the Babylon at work to speak the same language, while allowing them to choose their preferred way of communication.

If you want to learn more ways to improve your team communication, read this: Is Your Workplace Psychologically Safe?

You might say it’s just a cliché, but this really is key to success. A dreamer never gives up. Dreamers build the world as we know it and they shape a better future.

No one can work for 8 years on a project that might have never seen the light of day (or the ink of print, for that matter) unless they were driven by a strong will and wanted to see their dream come true. On the same page, because success doesn’t come overnight, you’ll need a great desire to make it happen to keep you going throughout the journey.

Don’t give up early! Working hard is not enough. It takes time, patience, resilience, and fine-tuning. So keep on doing it.